There are many, many ways in which to divide humans into two categories (with a bit of grey space in between): males and females, young folks and old folks, Nathan Fillion fans and people with no sense of humor or taste whatsoever (I keed, I keed). Today, I'm going to talk about a dichotomy I've been thinking about recently: fighters and flighters.

The fight or flight instinct is one of the few things you learn about in basic intro psych that actually seems like something normal human beings have (penis envy anyone? The only time I envy the penised is when I'm trying to pee on the side of a hill on the side of a windy mountain road and I fall over and pee all over my flip flops and realize while laying there on the ground, covered in my own filth, that what I thought was a secluded semi-flat spot on the side of a wooded hill is actually part of a trail...I've never zipped up my pants so fast in my life...true story...anyway). We're faced with physical danger, adrenaline kicks in and BOOM, we're ready to either throw down or run away.

In my experience, most people are either fighters or flighters. When you see a Lou Ferrigno-esque fella with a tire iron striding toward you, you either strike a Kung Fu Hustle pose and yell, "Bring it on, Incredible Hulk!" or you take to the hills like Usain Bolt (um, bad use of language here, I'm not saying Usain Bolt is a coward, though, honestly, if I were him I'd go for the flight option as he seems particularly well-equipped for flight...he's also a pretty buff fella, though, and could probably pack a wallop with a nice Chun Li roundhouse kick...God I'm distractible this morning...and full of random references).

It seems to me, though, that it's probably better to fall into the grey area in the middle - choose flight when you have a good chance of getting away, and fight when you have no other option. I doubt most people fall into this grey area, though, as being presented with immediate physical danger doesn't really allow you time to weigh your options. It's called an instinct for a reason - you don't think, you just do. When I asked Dylan whether he was a fighter or a flighter, however, he said, "It depends on the situation. I look at the threat and think about my skill levels and the environment around me and decide whether it would be better to fight or run." This answer leads me to believe that my husband is either:
a. delusional and has never actually been in danger of anything more serious than a toddler kick to the ol' huevos
b. a frackin' toaster or
c. Sheldon from "The Big Bang Theory" (which, amusingly enough, my spellcheck wants to turn into "Big Band Theory"...which I guess would be a show in which Tommy Dorsey and Glenn Miller are roomies and they clash over saxophone privileges and who's really the bee's knees).

...And with three bizarro references in a row, I fear I'm losing my non-nerd audience, so I'll move on...

Here's a story from my own life that perfectly illustrates the difference between fighter and flighter (much to my dismay I fall into the latter category):

So, I used to work at MagPies bakery here in Knoxville (a truly KICK-ASS bakery in case you're looking for that sorta thing) and I baked in the wee hours with my dear friend, Lindsay. MagPies isn't in a really dangerous neighborhood, but there are generally some shady characters hanging around that part of town in the middle of the night (which should not dissuade you from buying amazing cupcakes there as you won't be visiting them in the middle of the night). One night, probably around 3 or 3:30 a.m., the power went out. It is a bit eerie to be standing in pitch blackness at 3 a.m. (not to mention inconvenient when the power goes out while you're trying to simultaneously run 4 mixers and 3 ovens), so those proverbial hairs on the back of my neck were already beginning to stand up. Then, we heard the door in the hall make this whooshing sound. It sounded exactly like it does when someone opens the door (we later learned it was merely the electronic lock releasing or somesuch thing, but I challenge you to be rational in complete darkness at 3 a.m. on 4 hours of sleep).

Here's where the difference between fighters and flighters becomes painfully obvious. I grabbed my keys, my phone and my pepper spray which were, of course, conveniently stashed 2 feet from my work station (go go Gadget anxiety) and sprinted to the back door. I foolishly assumed Lindsay would follow me and was surprised to see as I ran past her that she had grabbed a pair of scissors and was heading towards the door in the hall. Lest you think Lindsay's a 6'2" female MMA fighter or something, I feel the need to point out that she's smaller than me. I'm 5'3" and 118 lbs., so she's basically the size of a newborn kitten. Nevertheless, this lil' kitten was headed toward the door to battle an unseen foe with a pair of office scissors. It was the most intensely badass thing I've ever seen...but also clearly insane, so I quickly persuaded her to make for the back door and my car (which was of course parked 2 feet in front of the back door...have I mentioned anxiety?) so we could lock the doors and call the police.

Of course, it all turned out fine, but it demonstrated to me clearly which category I am in: I'm a flighter. When danger reared its ugly head, I bravely turned my tail and fled (5 points if you get that reference, plus an invite to the dorkiest slumber party you'll ever attend). All in all, I don't think it makes me a coward. I never back down from a war of words like the one we're fighting with our insurance company over Ry's therapy hours right now. I know my strengths. I have a very good chance of winning those kinds of battles. Physical fights, on the other hand...unless my opponent is either roughly 85 years old and wheelchair-bound or willing to stick to ineffectual counters to the moves I've learned from cardio kickboxing, I don't really stand a chance...which is why I'm lucky to be married to Dylan. If we're hiking in the woods and come upon an angry bear, he can distract the bear by pulling out his laptop to run a statistical model to decide whether it's more prudent to fight the bear or run away and I'll be halfway back to the ranger station by then ;). 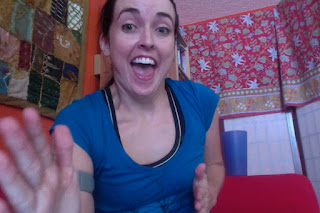