So I Totally Run Now

Hello there, Internet! So...it's been over 3 months since my last blog post and I have so many excuses. I mean, first of all, we moved. So that took...well...like a day. But then our Internet wasn't hooked up yet and it took a whole...four days to get someone out here. And then there was the unpacking which took...um...2 weeks. And like I had to go meet with Ry's new teacher twice and I had to find a new grocery store and I turned 30 so Dylan and I went out for a couple of hours...and...

...yeah clearly I have no really good excuse. There have been no lack of bloggable situations. I just generally sat down and said, "I'm going to blog this" and then ended up reading other people's blogs instead, because it's a lot less work to laugh at other people's funny blogs than to try to write one yourself.

I have, however, acquired a new hobby that is taking up a bit of my time and a lot of my headspace. I've started running!

Okay. Running is a wildly generous term. It's more like a zombie shuffle with occasional grouchy and reluctant sprints on speedwork days, followed by more zombie shuffle. But it makes me sooo happy.

I've been wanting to run for years, but as bizarre as this sounds, the stars had to align to make it possible. First of all, there was the financial question. People are always saying, "Oh, running is free." Bullshit. Running is expensive unless you're blessed with a resilient injury-resistant body (hint: I'm not). I did okay once for a summer because I had a pair of exercise shorts and tennis shoes, but then it got cold in the fall and I didn't have any pants to wear other than PJs or jeans and my shoes got worn out contributing to the patellofemoral syndrome crap I ended up in PT for and I didn't have the dough to fork out for a pair of running tights and a new pair of shoes. So I stayed indoors and pirated workouts off the Internets for awhile.

Secondly, I lived in a...less than ideal location for running. It wasn't the middle of the ghetto or anything, but there were some pretty unsavory characters in my neighborhood that I didn't exactly fancy meeting in the dark at 5 a.m. Plus, apparently folks in North Knoxville think it's funny to follow lone exercising women and yell things at them from the car. I was once even heckled by a neighbor who sat on her porch and yelled "Run, bitch, run" every time I ran by. Um yeah. So I stayed indoors and pirated workouts off the Internets.

Thirdly, there was a time in our lives, which is thankfully over (knock on wood), when my buddy was very sick and we needed to be ready to take him to the ER at a moment's notice. The last thing I wanted was for my hubby to have to be searching the streets for me while Boog seized in the back seat. So I stayed indoors very, very close to my little dude and pirated workouts off the Internets.

Also, there was the matter of free time. In the crunch at the end of Dyl's quest for his doctorate, he was working roughly 18-20 hours a day. Lacking the funds for a sitter or family in town, this meant I either had to get up at 3 a.m. to run or I had to figure out a way to do it with the kids. Since I have 2 kids and a jogging stroller that seats 1...yep...I stayed indoors and pirated workouts off the Internets.

Thus, I spent about a year and a half listening to Run Like a Mother podcasts and reading Runner's World in the magazine aisle at Target and dreaming. And then Dylan got the professor gig and we moved to Clemson and Rylan got well and poof! There was money (well not Jay-Z level money, but enough to get a new pair of shoes when they wear out)! There was time (I even have the luxury of putting Pippa in Mother's Morning Out so I have approximately 3 whole hours a week totally alone)! There was a friendly, safe neighborhood where I have yet to be heckled or followed regardless of the hour! Running parrrrrrty!

I started with the Train Like a Mother 5k plan and it was tough. I had a bad summer fibromyalgia-wise and didn't exercise nearly as much as I usually do, so I came to the plan with crappy cardiovascular fitness and a few extra pounds jiggling around. I stuck with it, though, and on my 30th birthday I decided I was going to run 5 miles. Well, I hit 5 miles and thought, "Heck, why not 6?" I kept running and ended up doing a 10k after not having run more than 2.5-3 miles in the previous weeks.

I'm not sure I can accurately describe what an accomplishment this is for me. I am not a natural runner by any means. I'm slow and waaay right-side dominant so I end up with a lot of injuries on the right side of my body. I have a bunch of scar tissue in my lungs from childhood asthma and pneumonia so my cardiovascular fitness is sloooow to build and probably does have an upper limit (though I've been able to stretch it further than I thought possible). There's also the pesky ever-present demon: fibromyalgia. Moderate exercise is good for my fibro, but if I push it too hard I'll end up barely able to move for a week. It's always a dance to keep my symptoms in check.

But this time I'm doing things right. I cut way back on the intense strength and circuit training workouts I was doing in order to not overtax my body and with a combo of running and body weight training, I've been able to cut my fibro flares down to the lowest level they've been in years! I'm doing lots of yoga for runners to work on my imbalances. I'm using a foam roller. I'm icing religiously and taking epsom salt baths. I quit drinking and am trying to get as much sleep as is possible in my nutty household. And so far (KNOCK ON WOOD), it's been almost 3 months and I'm injury-free, 5 weeks into a 10k program and able to run consistently 3-4 times a week.

I know there are people who will never understand the appeal of running and that's fine. I don't think I'll ever understand the appeal of knitting or watching football or making Bento box lunches for a picky toddler who's just going to throw half of it away anyway. For me, running is meditative. I run without music and I run outside, alone, in uncrowded areas. It's a place for me to be quiet and focused and alone with my thoughts. Also, you can't beat the runner's high when the entire world seems like a sparkly, wonderful place to be and you love everybody (unfortunately I'm finding it hits later and later the fitter I get. Took 4 miles to get there on Saturday). Plus it's a way for me to challenge myself and channel my competitive nature into something healthy.

Did I mention I get to do it alone? I'm not alone when I go to the bathroom these days so alone is a rare and precious thing.

P.S. I have no pictures of me running because...trust me...nobody wants to see that. So, below I will share a completely unrelated picture of Princess Peej in a state of joy similar to the one I find in running. 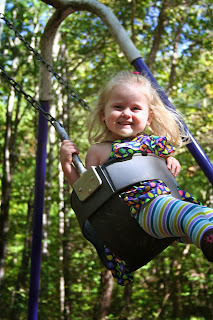