I woke up grouchy this morning. That in itself is not remarkable. I wake up grouchy 6 mornings out of 7. Notamorningpersonitis runs in my family. Today, though, the grouchiness persisted despite diligent application of coffee and shower. Okay, okay, okay, that's not that remarkable, either, Dylan (yes, I can hear your voice in my head now, handsomejerkface). The grouchiness finally began wearing off some time around the time that everyone was strapped into his/her respective carseat and blessedly, peacefully nodding off while I drove to behavioral therapy. That's when I noticed the underlying sense of urgency. I felt like I had to...something...not drink...not eat...not relieve one of the...er...baser, shall we say, urges.

All of a sudden, like some sort of creative aneurysm had burst in my brain, entire paragraphs of a novel I've never even thought about started pouring into my consciousness. I had to physically restrain myself from pulling over and grabbing a receipt/clean sleeve/side of my son's face to write on. When I got where I was going, I looked for a piece of paper and came up empty. Darn that industrious husband of mine for being the only man in the universe who actually cleans out the car when his wife asks!

I've been home for a little while now and the tidal waves of unwritten word have finally begun calming down. What remains is a deep pool of a story just waiting for me to grab a pen and let it out. It's every writer's dream, right? Creative epiphany out of nowhere? There are thousands of folks sitting in front of an empty Word document cursing me right now (or there would be if, you know, I had thousands of blog readers who were also writers afflicted with writer's block).

So...why am I blogging instead of furiously scribbling down this great gift from on high? Simple. I don't want to cheat on my novel.

Those of you who, through sweetness, boredom, or biological obligation, follow the minutiae of my life know that I've been writing a novel forever. Okay, not forever, but 6 years is a pretty big slice of my 28 year pie. This novel has actually been less of a writing project and more of a beefy-yet-wily opponent I've been in a constantly stalemating wrestling match with for the past 6 years. I beat it into submission and write a dozen or so pages and then it wallops me, lands me flat on my back and pins me to the mat with crippling writer's block for 2 or 3 months.

Part of the problem surely lies in the fact that for some stupid reason I chose to make my narrators male...oh yeah, and there are narrators - three to be exact. Thus, I have had to develop three separate male voices. Trying to pretend I am a 50-something fishmonger, a 30-something archaeology professor and a 20-something medical student has proved itself to be the P90X of mental workouts. The narrator of this new story is not terribly dissimilar from myself as she is a 30ish mother of an autistic child so her voice is just speaking in my head freely without me having to think, "Did that sentence sound like something a chick would say?"

The thing is, as wise as it might be to jump ship and let the 200ish pages of my first novel sink into oblivion, I just. can't. do it. This novel represents 6 years of creative energy and I am reassured when I read it over that it is, in fact, good, or at least readable. I know and love these characters and letting their story go unfinished just seems wrong. However, I can't seem to ignore this flood of a novel sitting in my brain, either. I'm going to have to start writing it - and soon. So, what's a gal to do?

I guess the only answer I can come up with is to commit creative adultery. I'll give certain nights to my main squeeze and others to this new, exciting prospect. Some may say it's wrong to divide my attention in this way, that it goes against the laws of God and nature. I say, "Relax, y'all. There's more than enough Megan to go around."

Me with my first novel and her new sister wife: 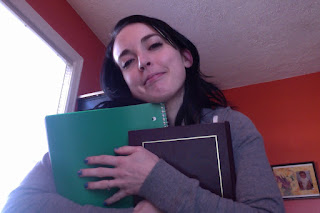