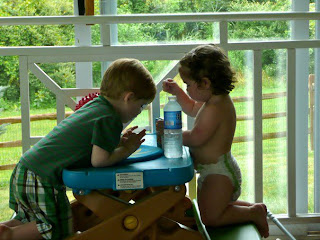 It's been awhile since I've written about our bathroom remodel and that's because our progress has slowed considerably. This is partially due to the fact that the husband is teaching summer school and partially due to the fact that he's ridiculously exhausted from doing all the work on the bathroom himself, and perhaps partially due to the time and energy he's devoted to his new push-up habit. He has begun dropping at random points during the day and breaking into a vigorous and spirited set of push-ups. I'll be talking to him and suddenly hear grunting and look down and see him on the floor merrily counting off reps while the vein in his forehead throbs like his brain is knocking on the front of his head screaming, "Let me out of here, this guy is nuts!"

But, let's face it, it's mostly because I've stopped nagging him. I have cultivated a practice of nagging (yeah, I'm calling it a practice. Suck on that, yoga) so exacting, so laser-focused in its ability to annoy that it rivals such classics as "Are we there yet?" and " 'Stop copying me!' 'Stop copying me!'" Under threat of a verbal form of 300 pairs of fingernails on a chalkboard, Dylan did excellent and speedy work on the bathroom, but since I've let up, he's gone back to the 40,000 other projects he has going (you know like working on his doctoral thesis, writing other scientific papers, teaching college students about ecology and middle schoolers about rat husbandry [yes, he is actually doing this...well sort of...there are rats involved somehow...I don't understand it, ask him], helping me raise two tiny demons...I mean angels...being our general 'round-the-house repairman/bug squisher/what-was-that-noise investigator/Oh-my-God-I-can't-look-at-another-dirty-dish-you-do-them second string dishwasher/domestic glue, brokering peace in the Middle East [just to see if you're actually reading this ridiculously long list] and, you know, doing all those push-ups.

Why have I stopped nagging him, you might ask. Well, other than the fact that the poor guy really doesn't deserve it and I'm beginning to wonder why he sticks around, here's why:

Once Dylan got the tile in and it dried or cured or whatever, we were able to move the washer and dryer back (the "we" in this case is an actual "we" as I'm pretty adept at grunt work, even if I come out to do it in my bare feet and Dylan sends me back into the house to put on closed-toe shoes and I come back out in knock-off Ugg slippers two sizes too big for my feet and he just sighs instead of explaining that they won't offer much protection against severed toes if the dryer falls off the dolly onto my foot) and once we did that, I could do laundry again and no longer had to worry about hanging with the crackheads at the laundromat and finding somewhere to get quarters (OMG, guys, it was like a college flashback, I'm telling you, well except they were potheads in Davis, not crackheads) and so I lost the fire that fuels the nagging.

The actual tiling was a pretty smooth process (and by that I mean I was not involved at all and thus have no idea how meticulous and aggravating it was) with only one minor hiccup at the beginning. I was standing in the kitchen trying to simultaneously make jam, homemade graham crackers and lunch for the kids while keeping Pippa from pulling out all utensils I own and running away with them and keeping Ry from falling off the end table he is firmly convinced is some sort of tiny stage for him to dance on. Suddenly, Dylan yelled at me from the bathroom,

Thinking he meant water to drink, I shot back in an irritated voice, "Give me a minute, I'm busy."

"No! Fill the large measuring cup and bring water NOW!"

"Oh heeeeeell no," I thought, and feeling generally put-upon by housewifery that day, I said, "I said I'm busy! I'm trying to cook food for you and your children while keeping them from killing themselves in a thousand spectacular and constantly-changing ways. I just spent the morning washing all the dishes you and your children (because they're always his children when I'm mad, of course) dirtied, picking up all the crap you littered across the house, scrubbing the food I worked so hard to cook for them off the floor where they threw it and --"

He interrupted me with, "Megan! I need water NOW!"

I can count on one hand the number of times the man has interrupted me in the 11 years we've been together. Generally he lets me finish my drawn-out, ever-so-slightly hysterical rants before beginning the painstaking process of reeling me gently back in to reality. So, I knew it probably was actually serious. I also knew I was still pissed because as much as I wanted him to work on the bathroom 24/7 like he'd been doing, it meant that I'd had zero help with the kids for about two weeks running and I was going completely out of my mind. Trying to strike a compromise between fear that he had fallen through the rotten section of the floor (and this would somehow require a large measuring cup full of water) and anger that he was making me drop the minor domestic circus I was performing because he couldn't walk 3 feet to the kitchen to get his own damn water, I stormed into the bathroom.

I found him cursing and wiggling about with his arms firmly stuck up to the elbow in a 5 gallon bucket of mortar. Suddenly the urgent request for water made sense. When your arms are stuck in a bucket of quickly-drying cement and you're faced with the choice of having to life the rest of your life with Han Solo arms or getting your spatially-retarded wife to use your reciprocating saw to cut you out, it makes sense to yell. So, I apologized...after I stopped laughing...and I brought him copious amounts of water, of course. It seems the mortar was too thick for the drill-bit attachment mixer thingy so Dylan decided to chuck it and use his hands instead.

Little home-remodeling tip for you: if you're mixing mortar to lay tile and it's too thick to mix with the drill-bit attachment mixer thingy specifically designed to, you know, mix it, ADD MORE WATER. Do NOT figure that there's something wrong with the drill-bit attachment mixer thingy and dive in there yourself. You will get stuck in mortar. Then you will have to yell at your wife, who will undoubtedly treat you to a litany of everything you've done wrong in the past 10 years before she realizes you're really in trouble, and if you've been an especially bad husband and the list is especially long, you will then be forced to choose between Han Solo arms and no arms.