P.P.P.P.S. Enough of this nonsense! Anyway, I wrote this blog and then I realized that if you don't know what Dylan does for a (sorta) living, then we sound like some seriously disturbed individuals who get our kicks by counting little bugs in the evening. Dylan is a Phd candidate in Evolutionary Biology and his thesis is on blahblahblahsciencewordsistoppedlistening in flour beetles. The rest of this will make sense now...well...most of it...

So, for our 7th anniversary, short on money, time, and ideas, I gave Dylan the gift of data entry. I told him I would spend 5 hours a week counting beetles for him and inputting the data into this Excel workbook he has that is the length of The Satanic Verses (in case you've never read Rushdie, that's a long-ass book...also I might be bragging just slightly by making that reference but only because it took me weeks to get through that monster) until the data was all entered. This was a win-win kinda gift because the sooner he gets all his data entered, the sooner he can do his math-science magic thing on it, finish his dissertation, and get a real job so we can stop living on a monthly stipend that is probably less than the amount Niki Minaj spends every month on dog grooming (that is, if she has dogs...celebrities of her ilk usually have a posse of fluffy yappers, but I'm not actually sure that she does since I just learned of her existence a few weeks ago...so clearly this was an attempt by me to appear hip...shut up, I'm only 28! I'm still relevant!). At least I thought it was a win-win kinda gift until he sat me down to train me...

The way this whole thing works is that I look at a picture of a petri dish full of beetleness and I count. This seemed simple enough until I saw the pictures. Here's an example: 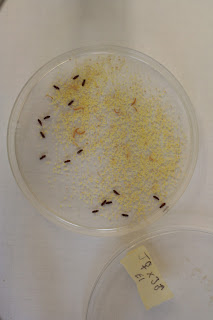 Right about now, you're going, "Um duh, Megan, the beetles are those dark spots...(man this girl is dense)". Yeah, I know. The thing is, I thought I would only have to count the dark spots, too, but there are actually other things in there: larvae and pupae, and I have to count those, too, even though some of them are so small as to be invisible unless you zoom waaaaay in and they have this weird sorta in-between stage when they're turning from one to the other and I have thus far not been able to tell what makes the in-between ones pupae and what makes them larvae...and I am almost certainly getting all this science wrong...did I mention I never took Biology?

I did not get much actual beetle counting done last night. What I did instead consisted of:

1. Counting the adult beetles really fast and feeling extremely smug at the speed with which I could come up with the right total.

2. Looking for pupae and larvae.

3. Counting the red, orange, and white smudges I assumed to be pupae and larvae and arbitrarily assigning them to the pupae or larvae column.

4. Adding a few to my totals since I always seemed to come up with a lower total than Dylan.

5. Nodding and saying, "Oh yeah, I totally see that one now" and "Yep, that one was one of the ones I counted. That little pupa...er...I mean larva son-of-a-gun. I got him for sure!" when we went over our totals together.

6. Making up beetle-themed parodies of "Call me Maybe" My favorite goes like this:

You are so pale
it's kind of hazy,
but you have skull-face
so pupa maybe?

I realize that doesn't make a lot of sense unless you know what a flour beetle pupa looks like. Here is a picture, but warning: it is not for the faint of heart. 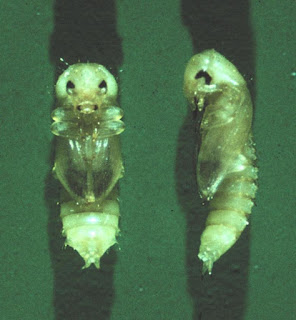 Creepy, right? That is some horror movie level bug-ugliness right there. But anyway, you see what I mean about the skull-face thing...although now I think they might look more like aliens...but then again there is a 75% chance that I just posted a picture of the wrong species' pupae, because in order to get this picture I had to search using the Latin species name of the beetle Dylan studies on the Internets and there is a very good chance that triboleum cornflakeeum is not its actual name (just kidding, Dylan, I hope I'm sitting next to you when you read that so I can watch the vein in your forehead pop out).

The rest of my "data entry" time was mostly spent arguing with Dylan and attempting to distract him from the (very boring) task at hand.

Me: Why the crap did you use a medium that is the exact same color as 2/3 of the things you're counting? What is this, Cheeto dust?

Dylan: No, it's not Cheeto dust! It's soy flour and that was kind of the point of the study. See...blahblahblah science words science words blahblah more science words, stuff I should already know and thus am pretending to both listen to and understand, blahblahblah...that's why I have to use the soy flour.

Me: Oh yeah, right...still...are you sure one of your undergrads wasn't eating Cheetos while they worked? I mean, really, this here? This is a Cheeto crumb. I'm certain. Where's the column for Cheeto crumbs?

Me: No, not that thing, that looks like a piece of someone's scab that flaked off. You should really get your assistants to wear gloves when they work. That's just unsanitary.

Me: Why are you making me use this insane grid line system to count these things?

Dylan: It's not insane. It allows you to keep track of where you are. You count everything in one box and then move on.

Me: I just don't work that way. It hurts my brain. I can literally feel my brain being injured as I look at this grid. I can get a doctor's note if you want.

Me (in desperation and boredom and the beginning stages of an eye-popping headache): So...are these two beetles right here getting it on?

Dylan: Oh yeah! They sure are.

Me: Wow. That is interesting...so what can you tell me about beetle sex?

Dylan (completely distracted from the task at hand): Oh man...blahblahblah science words science words blahblah (but then he got to the actual interesting part) Male beetles screw first and ask questions later.

Dylan: Haha. No, I mean, they don't care whether their partners are male or female. In fact, researchers have found that sometimes a male will accidentally impregnate a female with another male's sperm that he got on him earlier while mating with that other male (okay, I totally paraphrased that because he used science words to say it but I got the gist of it).

Me: Awwwww, so it's a way for gay beetles to still have babies without surrogates and IVF and all that!

Yeah...hopefully I'll suddenly gain the ability to focus on tiny, nearly unseeable objects some time today and will be more helpful tonight or I'm pretty sure he's going to call foul on the whole data-entry-as-a-gift thing and ask for a new pair of running shoes or a DVD instead.